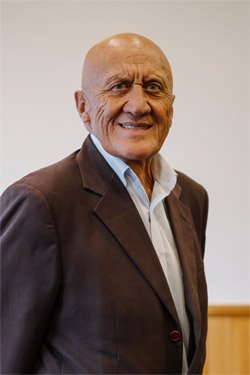 Matiu has  been actively involved in the leadership of Ngāti Toa for over 40 years. His early tasks included the development of the Rūnanga and its constitution, Drafting the initial Statement of Claim to the Waitangi Tribunal, and then leading the Claim through 3 sets of hearings (Port Nicholson, Te Tauihu and the special hearing to  address Ngai Tahu’s challenge against Ngāti Toa’s claim south of Paranui-o-whiti anf Kahurangi Point).

Prior to the Waitangi Tribunal hearing’s he represented Ngāti Toa in the NZ Railway Claims which resulted in a partial settlement.  Matiu was also chair of Te Ope Mana A Tai, a pan Iwi group that led the court challenge, as to the Crown’s authority over the foreshore and seabed. One of the outcomes of this challenge was the 2004 Iwi Aquaculture settlement.

Through this period of time Matiu has also been Chair of Takapuwāhia Marae and Te Ohu Kai Mōana. He has also developed and grown the many assets and activities of the Rūnanga, Toa Rangatira Trust, Takapuwāhia and Hongoeka marae.